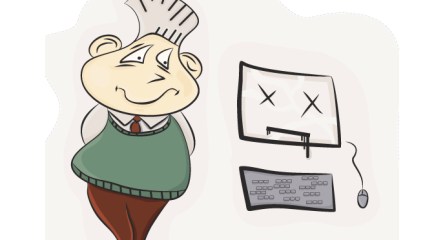 3 Stories from an IT tech

Rest assured you are not the only IT tech handling less grateful and unpleasant users. We perhaps can forget that our jobs are not so much fixing technical issues but helping people. In the face of turmoil, the best thing we can do is be patient and courteous.

The following stories are shared by an anonymous IT tech in an InfoWorld.com article called “Help desk? You need an analyst’s couch” published December 2, 2015

At one company, I worked with an administrative assistant who happened to be the mother of the guy I had replaced. In fact, he had been dismissed from the job I was currently holding.

Although she was nice to me on the surface, she would make certain statements and go out of her way to try to belittle me and the other two IT techs. We learned to roll with the punches.

One day, it was my assignment to set up a brand-new PC for her. I unboxed it, got it up and running, transferred her profile, and tested the network connection and printer. After a few hours of updates, antivirus installation, and removal of the obligatory bloatware, it worked great.

The next day, she submitted a work order saying the sound didn’t work and she had called her son and “he said the technician probably did not install the sound drivers.” She then requested a tech come by and finish the installation, as if it hadn’t been done properly.

I headed to her office. I knew the sound drivers were installed — after all, this was a computer out of the box. The days of making the user install all the drivers were long gone.

After sitting down at her computer and logging in, I saw the problem: Her sound was muted! I had set it so that the constant reboots wouldn’t play the Windows sound and disturb the rest of the office.

The look on her face was priceless.

I was new to a job in a school district, and a teacher needed a printer installed. The computer was a Windows XP Media Center Edition, so there was no joining a domain. Unfortunately, the only username on the PC was Administrator.

After trying several passwords that were on other computers at the school, I tracked down the teacher and asked her password. She declared she didn’t know and became agitated — and said she had been asking for the password but nobody would give it to her.

I ended up installing the printer, and yes, we resolved the password issues.

She insisted she was typing it in correctly, but before I could suggest toggling her caps lock she said forcefully, “I’ll take care of it!”

Several minutes later she called and thanked me for “fixing the problem on our end.” I had no idea what she was talking about, so I had her explain.

It turns out she called the vendor’s IT department and told them something was wrong with their server. After a few minutes, the vendor checked everything and confirmed there were no problems, told her the issue was on her end, and walked her through the password reset sequence. After resetting her password she was able to log in, but somehow believed that I had goofed up at first yet fixed it so that she could log in.

Sometimes it’s easier to let a situation remain as is and permit the user to interpret it, even incorrectly. Then you move on to the next user problem.

What can we learn from this? When you feel like treating others like Nick Burns, keep calm and be patient. You can do it!

Share you IT support tech stories in the comments below